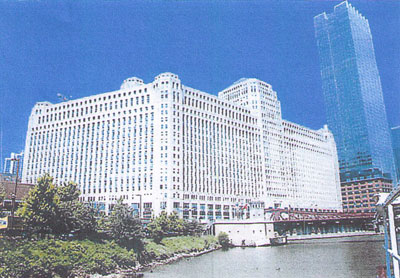 Even though it's known as the Windy City, Chicago was still blown away by a recent storm front that blasted the city with wind gusts up to 100 miles per hour.

Atop the Merchandise Mart complex - some 25 floors up - the storm blew away a sizeable chunk of roofing. That's when Geroge Criel, President of Century Roof Consultants, turned to a PVC Roofing System.

"We looked at a lot of different roofing options, but I really wanted to get a warranty for wind gusts up to 100 miles per hour," Criel said. "With one of the manufacturer's top rated installers, we had the ways and the means and the equipment and experience to do this."

It's so big it has its own zip code!

Built in 1930 for retailer Marshall Field, today the Mart has its own zip code and "el" stop, and more than 10,000 people go to work there everyday. Add to that another 3 million visitors annually, and you have one bustling building that can't be disrupted by crews making roof repairs.

According to Criel, "Logistics made this a very labor-intensive project."